4 Clubs in a real battle!

The evening of Monday the 11th of May saw the latest running of the annual 4 Clubs Competition. The four clubs in question are, Castleford, Normanton, Pontefract and Wakefield, and as in sport often the keenest competition is between local rivals. So it was tonight. The competition is “Open” i.e. there is no set subject so anything goes. The actual subjects of the entries ranged from whisky glasses to lion cubs, architecture to landscapes, rugby to ruined huts, motorcycles to golden eagles – a real eclectic mix. This is a competition for prints only with each club submitting their 10 best prints. It resulted in a collection of 40 superb images, with Wakefield trying to retain the shield.

The person with the unenviable job tonight was the judge Howard Toll. As usual he received the prints some days ago to look at them in detail, evaluate them and give them a score out of 20. He has no idea who (or which club) has submitted each print so there are judged purely on their merits. It was a large attendance for the judging, with visitors/supporters from each of the clubs there to listen to the comments. Howard critically appraised each print, giving positive and constructive comments, showing where, if possible, improvements could be made and identifying the good points. He made the point that the quality of the entries was so high that many of the prints would have probably won other competitions, but in this company they may be relegated to “also-rans”.

Twenty prints were judged in the first half and twenty in the second, with plenty of time for everyone there to examine the prints in detail themselves. At the end of all the judging the scores were added up and checked and it turned out to be a very close result indeed, with only a relatively few marks covering all four clubs. The result was
163 points Castleford
167 points Normanton
173 points Wakefield
176 points Pontefract

So it’s congratulations to Pontefract and they are the holders of the shield this year. Next year the contest will be held at Normanton and there are three clubs who know they have to go that little bit further to get that shield. A gallery of a selection of the high-scoring prints will be on the website soon. 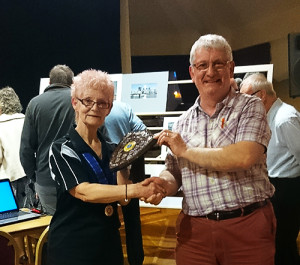