A Light’s Night With LED’s

On the evening of Monday 25th June John Gardner, our own professional photographer, presented the latest of his regular series of “Lights Nights”. It is a practical evening where John comes along with lighting and model(s) to demonstrate on how to set up lighting, either in your home or in a studio, and demonstrates what can be achieved. Each time he tries to introduce a new technique and everyone is encouraged to bring their gear along as there are plenty of opportunities to shoot effectively-lit shots yourself.

Tonight was a little different as John had brought along some LED lamps which provide a constant light source rather than a brief flash. John doesn’t use them so often as he feels that for his purposes they lack the “add-ons” such as snoots, barn doors and other accessories readily available with conventional studio flashes. He did, however, bring along some modifiers such as diffusers and filters.

The light from LED is usually quite cold and slipping a coloured filter into the unit allows for changing the colour temperature. Some units have built-in colour temperature controls. One of the big differences for the photographer is that automatic modes can be used on the camera and no flash trigger is required. Normally on these nights John guides everyone with recommended camera setting for manual mode and then provides a flash trigger. None of that was necessary tonight but people did notice that the LED lights weren’t as bright so exposure times were longer or apertures had to be wider. The latter can give benefits for photographers who want to use depth of field creatively. 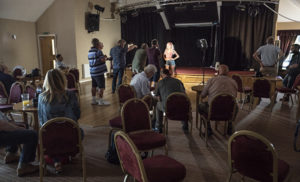 Sarah was our model and with the outside temperatures still in the 20’s and the room temperature probably higher she had her work cut out. Not having to use a flash trigger made for a quicker changeover between photographers and often allowed two to shoot at once. This gave everyone ample opportunity to get some really great shots which may well be surfacing in competitions in the future. Everyone enjoyed the evening so thanks again to Sarah and to John for allowing members to try out the use of LED constant light sources.