The evening of 18th January saw a talk by Andy Beel FRPS, which was focussed purely on black and white prints, attended by over 50 people. Andy’s work is almost all monochrome in it’s various guises and he was giving members the benefit of his long experience in the medium. This evening’s talk was the first in his “Tour of Yorkshire” where he is presenting his talk to 4 different clubs across the county. He 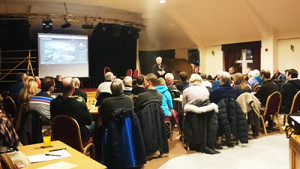 started his talk by suggesting that black and white photography is all about “process” – getting from what the camera captures to  what you want to see as the finished print. This process is essentially about both global brightness and contrast and local brightness and contrast. Human beings, he said, were programmed to respond to brightness and contrast first so that’s what their eyes are drawn to first in an image. Andy then started to show some of his quality images which really demonstrated his style and ranged from standard black and white through infra-red and then lithographic processing. Subjects included pipelines, dancers and buildings amongst others and locations varied from Iceland to Holland. All these prints were interspersed with Andy’s personal views of photography and processing, which made the whole talk illuminating.

In the second half Andy moved away from prints and onto his laptop to give some real-time examples of how he used Adobe Photoshop and Lightroom to produce his style of image. His first (and possibly most important) point was that shades of tone very close to either black or white may not be able to be reproduced and he demonstrated that anything with less than 9% or greater than 94% light would show as pure black and white respectively. This may explain why some photographers find no detail in their deep shadows or in their highlights. Naturally Andy went on to show how this problem could be dealt with to ensure all detail/texture could be seen on the print or digital image. He continued in this vein demonstrating clearly each of his techniques and explaining along the way. He demonstrated why he prefers to use curves adjustments rather than levels and presented a very convincing argument. One underlying theme was the making  adjustments gradually so that the image could be developed sympathetically.

It was a good evening enjoyed by all there and everyone, whatever their level of skill, got something out of it.