A Visual Feast of Creative Photography

On the evening of Monday 10th June a full house of members and visitors thoroughly enjoyed a presentation by Dianne Owen FRPS on Creative Photography. Dianne became interested in photography at an early age when her uncle showed her the magic of processing an image in the darkroom. She subsequently experimented to make her images slightly different. 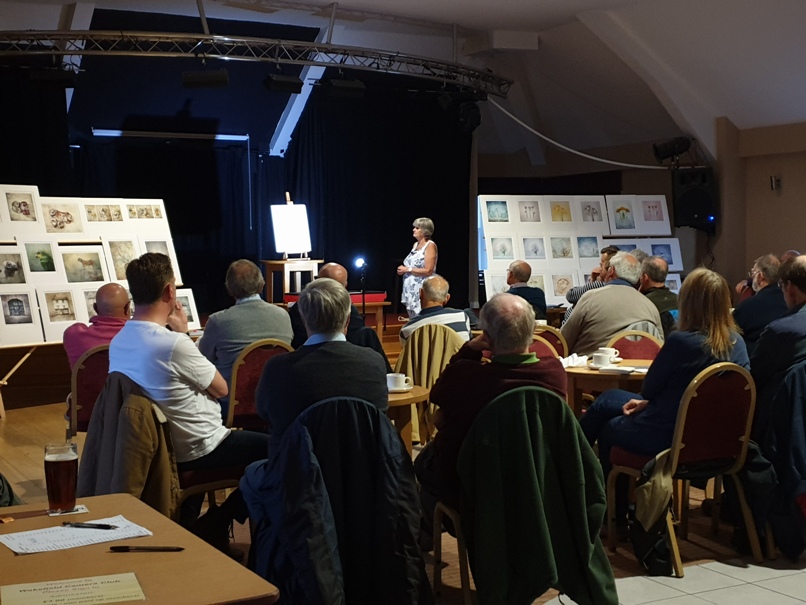 The digital age made the creative process easier, bringing another dimension and making it easier to add mood and emotion. She has certainly taken full advantage of the techniques to create striking images. Others agreed and she managed to achieve both her ARPS and FRPS distinctions in the same year!

Dianne only brought prints with her as this is her preferred medium and she is a ‘Brand Creative’ for Hahnemuhle FineArt print papers. She classes herself as a photographic artist and all the components of her images come from her own camera – or phone. Dianne said that 75% of all the images on show now come from her mobile phone to the surprise of most of the audience. She collects lots of shots of textures and purely uses Adobe Photoshop for processing.

Dianne started with prints showing family dogs and it was a good introduction to her work – prints with great impact and an artistic feel to them. She explained that she often takes images in sets – a theme running through that group of work. This leads to creating triptychs which she really likes. As Dianne explained she likes to “push” everything and doesn’t like leaving things as they are – what comes out of the camera or phone is a starting point for her work. Dianne then moved on to flowers which were very striking and created in her unique style employing items like pots and vases from around her own home. She uses lots of textures to give the image a particular feel, sometimes almost totally obscuring the background. This may not be conventional but she said she was taught to learn all the rules – AND THEN BREAK THEM!

Dianne’s subjects ranged over dogs, flowers, bicycles, cutlery, nests, squashed cans, houses, animals, landscapes and derelict taxis. She explained that she didn’t do studio portraits etc. as, if she includes people, she likes them to be in their environment. Many figures in her work are mannequins or the Anthony Gormley statues in the sands near her home. Although it never looked like it, Dianne said that it was all just “messing about” and having a bit of fun. This plays down the knowledge and inspiration which goes into her work. She says she just enjoys the process. To help everyone see the work she produces she handed out many of the prints to circulate around the room as she talked. During the evening members saw over 90 of her outstanding prints, many of them in their hands. As usual there was plenty of time at the half time break for everyone to view the prints on the stands and discuss them with each other. On the back of each print Dianne had noted which paper she had used as she feels that this is a very important component of the final effect. The paper may vary according to the subject matter or the colours being used or the effect Dianne wanted to create. Using the wrong paper could ruin the effect and may be the difference between winning an award and not.

The evening ranked as one of the highlights of the year so far with Dianne’s entertaining and informative commentary and superb images combining to provide inspiration to everyone in the room. Thanks Dianne for a great evening. You can see lots of her work here. Not only did we have the talk but Dianne, being a ‘Brand Creative’ for Hahnemuhle FineArt print papers she gave us a discount code to use if we buy their paper. You can see it below. 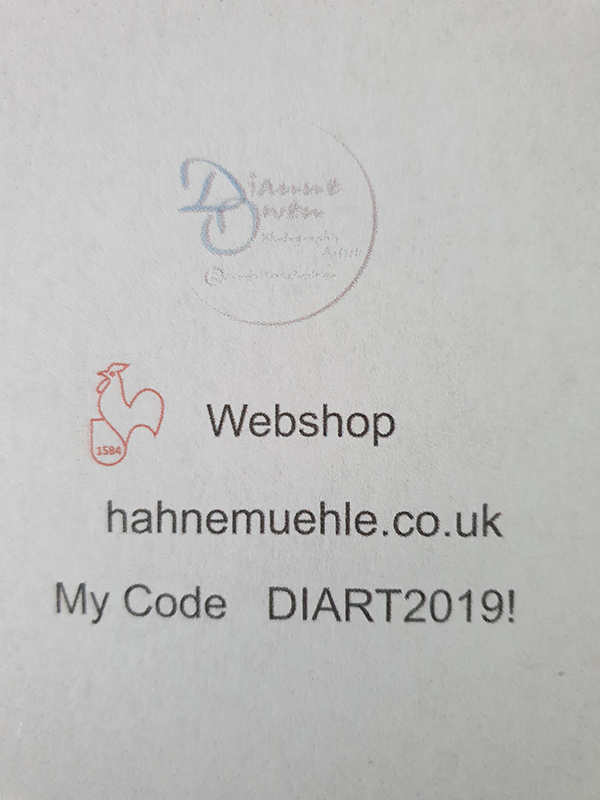