Unfortunately I wasn’t able to go on the Anglesey trip but here’s a report from Steve Wood (who seems to have organised it brilliantly) and some images in a gallery at the bottom.

On Friday the 5th October, Members of WCC descended on the beautiful Isle of Anglesey for a short trip to capture some of Anglesey’s stunning photographic locations, but not before some members spending 4 and 5 hours battling the traffic on a Friday evening :-(. Other members able to travel down earlier in the day were able to stop off and take in other locations en route such as the Duke of Lancaster boat that is permanently moored at Flintshire and some local sites around Bangor where we stayed. 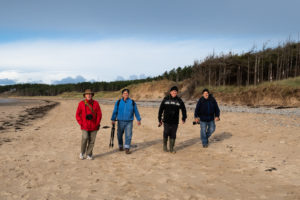 Sadly the weather was not great in the evening and a welcome meal in Bangor was had accompanied by some lively banter before retiring to the hotels in preparation for an early start.
Saturday’s early start and poor weather forecast had some members choosing to stay in bed and deciding to meet at our second location, but for those that rose before the Sun, despite a) having to squeeze in one car sadly due to an illness of one of the members, b) having a brisk walk along Newborough beach and for some, c) deciding to wade across 6 inches of water which was cutting off the island (due to high tide), and e) having to use the alternative route to the location due to filming!! were rewarded with some gorgeous morning light on the very photogenic Ynws LLanddwyn Lighthouse, well worth getting your feet wet Robert and Trevor 😉
Allowing for the walk back to the car park and a toilet stop, we arrived at South Stack around 15 mins later than scheduled and set about fighting the wind to look for some compositions with some  choosing to head down the stairs whilst others preferred to shoot from the top of the hill. The majority of the team were able to catch a bit of lunch in the RSPB cafe before heading to the 3rd Location at Church Bay. 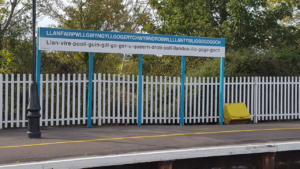 After a brief loss of GPS on the Sat Nav adding a few minutes to the journey, we arrived at the location as the tide was out, allowing access to the rock pools and patterns in the sand as the water receded. One member (whilst deep in concentration) was caught out by the tide, perched on a rock at the tides edge, they found themselves surround by water which was too deep even for wellies to step back on the beach – Note always be aware of the tide when shooting seascapes…..
All too quickly we had to pack up and most of the group headed to the next location at the disused copper mine at Parys Mountain where the colours of the landscape seemed out of this world. Glinting in the sun, there were coppers, greens browns, golds it really was surreal. By now we were running slightly behind schedule and whilst a few more hours could have well be spent at the mine, we had to depart for our final destination of the day at Penmon Lighthouse. 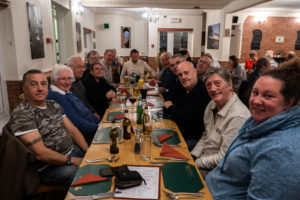 The forecast for the day had started poor with near 100% cloud cover supposedly dissipating to 1% by sunset, but as luck would have it, it was wrong and we were treated to some fantastic clouds picking up the colour of the setting sun along with the lighthouse and Puffin island in the background. Everyone ventured as close as possible to tide edge to make use of the crashing waves, before retreating to safety as the sun finally dipped beyond the headland as darkness fell.
Making our way to the restaurant with some cracking images in the bag, allowed for a relaxed social end to the evening whilst enjoying some good food.
Sunday for some was time to check out and depart to make the 2 and a half hour journey back home (some further 😉 ). The remaining ones had a few more days to explore what Anglesey has to offer and hopefully we will get to see some of the results later. 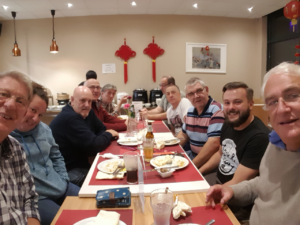 Sadly one of the members was unwell for the Saturday so was not up to photographing which was a real shame, but everyone commented that they had a great time and for the lesser experienced or those not used to shooting scapes, assistance was on hand to getting a better image. I will organise another trip soon which I hope will be just as successful. If you are interested in joining me, let me know.
For now here a couple of images from the trip, there will be a gallery for others to add images in over the coming weeks. (Please send me any more images you may have to add to the gallery – [email protected] or [email protected])