An Essential Evening of Composition

On the evening of Monday 15th January a packed meeting room was treated to a an entertaining and informative evening on the subject of “Composition”. The talk was presented by Chris Upton who is a travel, landscape and social documentary photographer based in North Nottinghamshire. He is also a Fujifilm X photographer and works for the Tourism Authority of Thailand amongst others. He had brought some of his Fuji kit along with him for people to see. 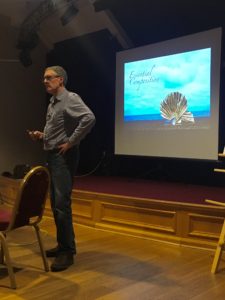 Chris started the evening with a general introduction highlighting the fact that as digital cameras have developed they can do most things automatically but the one thing that they cannot do at all is composition. Some believe that you are simply born with the skill but he believes it can be learned and that was what the evening was focused on. Chris felt you must be clear about what you are trying to communicate to the viewer and to think about it when you compose an image and what response/emotion you are trying to evoke in the viewer. He always uses a tripod as he feels this slows him down and makes him think about what the image is about. He felt that there are a whole series of compositional guides rather than actual rules as you can still decide to do different things and have a successful image.

He then set about his “20 Ways to Improve Your Pictures”. These were 1) Rule of Thirds 2) The Golden Mean 3) Viewpoint 4) Foreground 5) Leading Lines 6) Framing 7) People 8) Angle 9) Background 10) Numbers – particularly 3’s 11) Balance 12) Negative Space 13) Colour 14) Cropping 15) Lens Effects 16) Focus 17) Shapes 18) Patterns & Textures 19) Symmetry 20 ) Caution …. and possibly 21) Break the Rules! I could write quite a lot about each one from Chris’s presentation but it would almost became a book. Suffice to say that every single one of the topics was well explained and supported by a seemingly endless stream of well-chosen superb images which amply conveyed the ideas Chris was putting forward. It was all very practical with techniques and ideas that everyone could use. The images were drawn from both this country and from Chris’s many overseas trips. Throughout Chris was both clear and entertaining and the audience was engrossed all the way through. Even at the interval Chris had no respite as he explained the Fuji gear he had brought along to a substantial group.

At the end of the evening everyone had gained something from the talk as was indicated by the strength of applause at the close of the talk. I think we can all look forward to seeing some compositional improvement in the competitions this year. An excellent evening enjoyed by all. Thank you very much Chris. You can see some of his images on his website here.