↓ Skip to Main Content
Home › Recent Activities › Did we have Nudes for You!

Did we have Nudes for You!

The evening of Monday 25th January was President’s Night, where the club President arranges a speaker and topic of their choice. 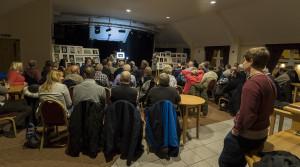 Sally Sallett arranged for Tim Pile to present his talk “Have I got Nudes for You” to about 70 members and visitors, making it one of the best attended evenings for some time. Tim is an internationally recognised photographer who has gained a whole host of gold medals at international exhibitions with his attention-grabbing images.

Tim explained that his working career was in IT and he felt that this gave him an attention to detail which comes out in the photographs. The opening of his talk showed his photographic development. As many did, he started with landscapes, and things developed from there. Unlike many current photographers he is not really interested in his photographs actually telling a story, he is just interested in the image. He is not a great fan of studio work, usually trying to work with nature using natural light and his imagination, contrasting straight lines with natural curves. All of this entertaining and stimulating talk was accompanied by a constant succession of top drawer prints featuring models in a variety of locations. He likes to visit Scotland for his shoots as there is a right to roam meaning he can access abandoned crofts and buildings without trouble. Despite the supreme quality of his work, Tim doesn’t feel that his photographs are, in essence, different to any else’s as it is all about light and how it is managed. He accepted that in many cases his job was easier than a landscape photographer’s as he can be sure where the viewer’s attention is concentrated. His next sequence of prints illustrated his views on lighting before moving onto his use of composition which sometimes went against perceived wisdom. Finally in the first half Tim showed the panel of prints which he used to attain his ARPS qualification. 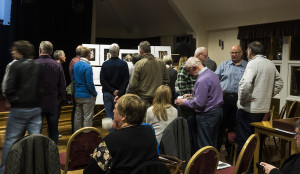 During the interval there was ample opportunity to “get up close and personal” with the prints Tim had shown in the first half. It was quite a scrum as everyone wanted to see the detail in every image. In the second half Tim started with a series of prints taken on the beach. He then moved on to models in buildings and then out in countryside. In each case Tim explained how each location was chosen and set up and why he had used a particular compositional device, even if it broke the accepted rules of composition. Those present were certainly convinced by his arguments because the succession of superb prints kept rolling on. Every single one was of the very highest standard. Tim pointed out which ones had received gold medals in competitions but explained that, for him, it was the journey not the award that was important. He went on to say that receiving an award didn’t make him a better or worse photographer – he produced the prints he wanted to make, and just wanted to improve, although it was difficult to see where the improvements may come from!

At the end there was prolonged applause for a wonderful evening and an opportunity to view the prints from the second half. If you want to see some of Tim’s amazing work then visit his website by clicking here.