It’s a small world – but wonderful.

A very good attendance provided an enthusiastic audience for Justin Garner who was presenting an evening of macro photography. In the first half he showed where he started with macro, using simple extension tubes which are relatively cheap and can be effective. The lack of depth of field using tubes was used creatively by Justin to blur anything other than the subject, creating a painterly effect. Justin was then hooked and he bought a 100mm macro lens to further his efforts. To get round the shallow depth of field problems he started to do focus stacking – where many images of a subject are used, each focussed a tiny bit further into the subject. These are then brought together in software to create one image where the whole subject is in focus. To take the shots he used a set of “rails” which the camera is mounted on and allows for tiny movements. All this is on a tripod which he likes to use as it helps him concentrate on composition and keeps his hands free. It was a learning process as he found it didn’t always work but when it did it was incredibly effective.

Throughout all the explanations Justin displayed an arresting slideshow of macro shots starting with flowers, mostly close to his home. He said it was a branch of photography where you don’t necessarily have to travel far – almost any field or garden will yield subjects. He showed that it can be a really simple image. He showed a shot of the gills on the underside of a mushroom which became a wonderful abstract.  He always carries books on flowers, butterflies and fungi so he can identify what he has captured, which means he is learning about things other than photography as well. He continued to show a series of arresting images of fungi which almost appeared to be another world. Caught up in macro photography he then bought an even more powerful lens to get the image he wanted. With every image Justin explained how he got the shot and any special techniques he used which made the talk very practical. He then moved on to insects which brought their own problems – they move! If you are taking a series of shots for focus stacking you want the subject to be static but insects tend to be mobile. To overcome this Justin used to go out early in the morning before the insects had fully warmed up so they tended to be still and not fly away. One technique he used sometimes was to set everything up focusing on a flower, particularly ones tempting to insects. He would then wait until the insects came to him rather than chasing them. This brings chance into it but when it works, as it did for some of his images the results were very effective e.g. a hoverfly coming in to “land”. As Justin said, if it was all easy it wouldn’t be as much fun. 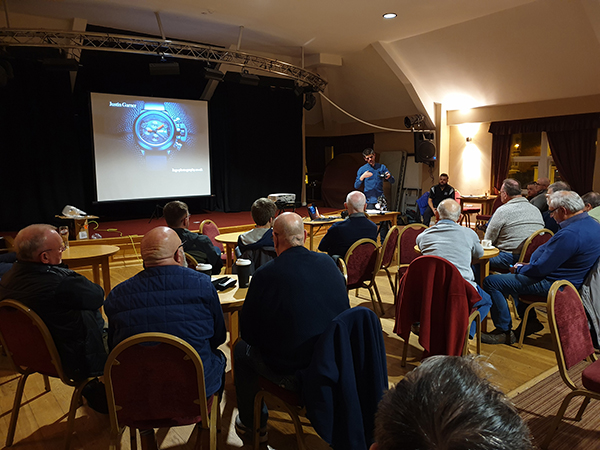 In the second half Justin took us through the process of focus stacking. It was a real help that he showed some of the shots that didn’t work, explaining the he, like everyone else, was still learning. He always tries to use a low f-stop to throw the background out of focus but recognises that this will give him less depth of field, hence more focus stacking. He often takes several “stacks” of the same subject as he knows some of them won’t work. He also highlighted some of the non-camera problems like trying to get the insects to move into the right position so it stands out against the background. 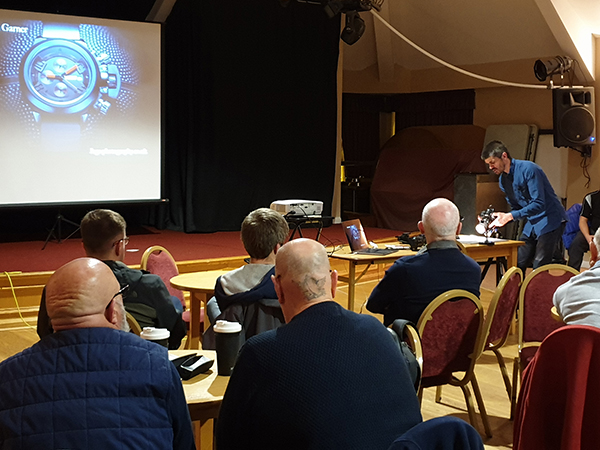 With his equipment set up he did some practical focus stacking using a watch as a subject. He showed an impressive series of watch images and tried to recreate one but time was against him. It did manage to give everyone the idea and the opportunity to see just how both the shooting and the software work in practice.

It was a really good evening and Justin generated a lot of interest and enthusiasm with plenty of questions at the break and at the end with many members gathering around the kit to examine it in detail. Certainly many members were heard saying that they were going to give macro a go in the next few days. It was a testament to a good evening that there most members were still there way after normal finishing time. Thanks Justin for such an enjoyable evening.