Eyes Down for April’s results

As you probably know  April’s online competition subject was “Looking Down” and we had a good set of entries for this month’s judge, Angela Crutchley-Rhodes, to peer down on and get into some sort of order. Kudos to Angela as she received the images late due to technical issues with the website but has turned them round double quick and even commented on every single one. So without further ado here are her words of wisdom.

I have really enjoyed looking at the entries in this month’s competition although I wasn’t expecting there to be so many of them! Thank you for giving me the opportunity to judge them and I hope you find my comments helpful or, at least, interesting and not offensive!

*Bingley Five Rise Locks* This is good shot of an interesting subject with nice colours and a detailed background. I feel like I’m looking a the lock though rather than down the canal though so perhaps a better viewpoint for a ‘looking down’ competition would be to stand in the middle of a lock gate (if that’s what they’re called?) and look straight down the canal so the steps down are more clear.

*Looking Down* This photo was taken from a good vantage point with nice colours that come out well due to the time of day. I like the interesting sky and how the blues contrast with the red train. Some of the buildings are a bit dark however and could do with being brightened up a little. I love the owls and the moon on that tall building to the left – are they painted on or is it a projection?

*Eye Down* This is an amusing image and I’m glad I’m not standing underneath it in real life! It’s sharp and I find the concentric circles pleasing; they remind me of chain mail. I do feel like I’m looking up at the eye though rather than it looking down at me!

*From the Top of the Lighthouse* Taken from a great point of view, looking straight down at the unsuspecting people below. The ladies walking past, oblivious to the men on the bench, add more interest and I like how the woman’s trolley is pointing in the direction she’s walking, giving her an arrow shape. The only thing that lets this image down in my opinion is that the woman at the top is very close to the edge of the frame; the photographer could have possibly extended the frame a little and, if there’s no more in the original file, filled the space using content aware fill in Photoshop.

*Spiralling Down* Looking at this makes me feel quite dizzy! I like the direction of the steps and the way they form triangles around the central point. The lighter areas at the edge of each step also add interest and make it look a bit like the petals of a flower. I feel there’s a bit too much to the centre column though, which isn’t in focus, and I find myself looking at that rather than the steps. It might have benefited from a slight change of camera angle and a larger depth of field so that more of the image was in focus.

*Into The Abyss* I love the geometry in this image with the central octagon inside a semi-circle and the straight lines at the bottom of the frame. The water is a little dark though, but this does therefore mean that the walls of the plughole stand out more. Perhaps this would work better as a black and white photo rather than colour?

*Can I Come Down?* What a sweet little mouse! The photo is sharp and in focus where it needs to be and the colours and the textures complement the subject, making it look more like a painting than a photo. I find myself looking at the daffodil rather than the mouse though so perhaps the yellow could be darkened down a bit?

*Down and Down* As someone who hates looking straight down, this is the kind of image I was dreading! The grey colouring, straight lines and sharp angles gives this seemingly never ending downwards spiral a metallic, hard, cold feeling and makes the person walking down these stairs appear lonely and almost lost.

*Tulip* The photographer had the good idea of taking a picture of a common flower from an unusual angle which adds interest. The colours are good and I like the position of the tulip within the frame. The background is out of focus and just adds the green colour which contrasts perfectly with the red petals; however, I don’t feel that enough of the tulip is sharp or in focus. I’d have liked to see the petals in focus as well as the stamens and the stigma in the centre.

*Frasley Town St From St. Johns* This photo was taken from a good vantage point so you’re looking down the road which leads the viewer nicely out towards the landscape beyond the town. The image is interesting but a little flat; it could possibly do with a boost in contrast and a bit more interest in the sky, which is quite empty.

*Who’s That Down There?* A nice, bright and sharp image and the monkey looking down into the water to study its reflection makes an interesting subject that was well spotted. It is a shame that the reflection isn’t that bright though because it’s not immediately obvious when first looking at the photo. Also, perhaps a little bit could be cut off from the top because the items on the water’s edge are somewhat distracting and make the image seem messy.

*Woaaahhh* I have a photo taken from this point of view, looking over the wall at the top of Wakefield Cathedral’s tower down to the roof of the Nave and then out to Wakefield and beyond, but without the feet! The feet make this image more fun in my opinion and add an extra ‘something’ to a photo that I suspect everyone who’s taken part in the tower tour has taken.

*Shadow Transport* An interesting photo which makes good use of light and shadow as well as the circles, triangles and diagonals giving the image a nice geometric feel. Personally I feel that it would be better if taken from a slightly different angle so that it was ‘looking down’ more at the bicycle’s shadow rather than across towards it if that makes sense?

*Dubrovnik* I like the way the photographer has looked down from a high vantage point towards the town and out to sea. The fact that it was taken on a very sunny day though means that some of the shadows on the right of the image are very dark, on my screen at least, and lack detail. The blue sea and sky provides a nice contrast with the orange buildings but the horizon appears to be curved in the centre and would benefit from being straightened a little.

*Evergreen* The muted greens and pinks in this photo are lovely and the trees around the edge seem to form a circle around the central green tree of the title which makes it stand out and catch the eye. The view of the trees, looking down from above, makes an already interesting subject seem more interesting because it’s so different from the usual angle.

*Person Hole Cover* There are lots of small details in this manhole cover: the key in the middle makes me wonder what might be hiding underneath and reminds me of the trapdoor that must not be opened lest all the monsters escape! I like the grey tones and the shadows give the cover a 3D feel and make the details stand out. The skew-whiff angle makes me a little uneasy though and would have preferred it if the photographer had managed to stand directly above the circular cover so it was square on in the frame.

*5500ft Between Me and the Valley Floor* I’m glad I’m not the person on the edge of that cliff! The greens in the foreground and background compliment each other well and the sharp hilltop and softer landscape below give a good sense of distance and height. I’m assuming that the climber near the edge is the ‘me’ in the title so I wonder if it’d be better if they were larger in the photo? Perhaps cropping a little from the bottom and the right of the image would achieve this?

*Batwoman* I like the idea of the Batwoman character overlooking the city and keeping an eye out for danger. The spire opposite her balances the image and the light on Batwoman means that we look straight to her face; however, it’s difficult to make out some of the detail in her cape and she almost blends into the background at the bottom and to the left of the image slightly.

*09 Nothing Stirred* I love the repetition of the circles and the squares in this image and the way the tables and chairs are randomly placed in the space rather than evenly spread out. The only way I feel this image could be improved is with the inclusion of a diner at one of the tables but then it wouldn’t match the title!

Now to put some names to the titles. Receiving Commended was Steve Wood with “Into The Abyss” and Highly Commended were Trevor Bottomley for “From The Tope Of The Lighthouse” and Daniel Kinghorn with “Evergreen”. In third place was Sally Sallett with “Woaaahhh” and in second place was David Kershaw with “Nothing Stirred”. At the top of the pile was Peter Wells with “Down And Down”. Well done to all of them and thanks again to Angela for all the comments and the speedy judging. Why not have a “look down” below at the images and pick your own favourites. In the meantime get your thinking caps on and your shutter finger ready for May’s competition where the subject is “Architecture”. 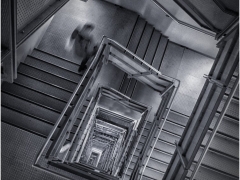 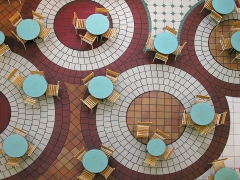 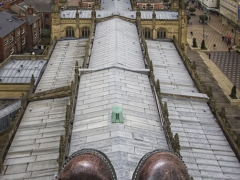 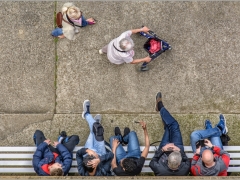 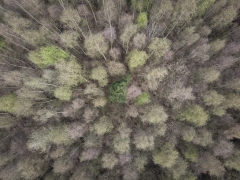 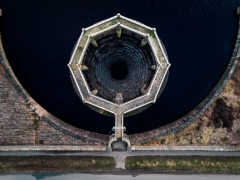 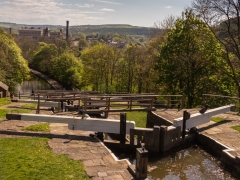 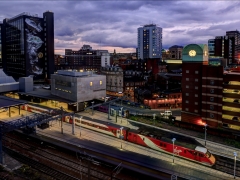 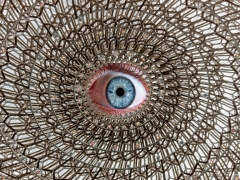 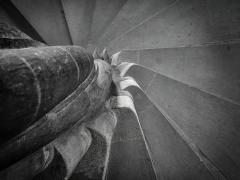 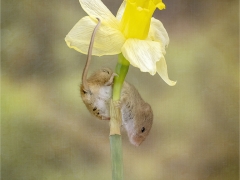 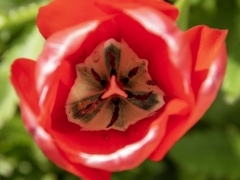 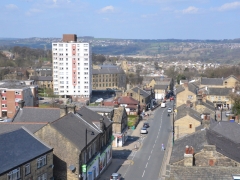 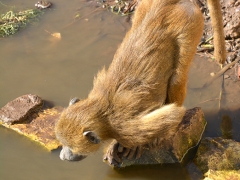 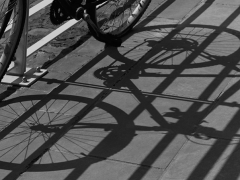 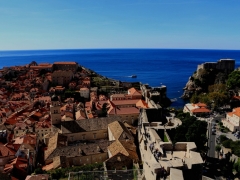 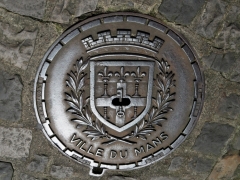 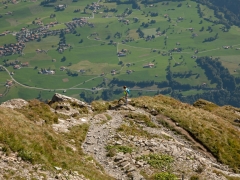 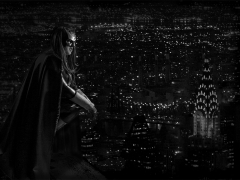 END_OF_DOCUMENT_TOKEN_TO_BE_REPLACED

We meet most Monday evenings on Zoom Click here to contact us and here to view our calendar of events.
Top
WP2Social Auto Publish Powered By : XYZScripts.com
error: Content is protected !!