Michelle Howell has been on the awards trail again with her latest subjects. After achieving great success with her frogs (and if you haven’t seen the frog images you should) Michelle has moved on to harvest mice. Here’s her words 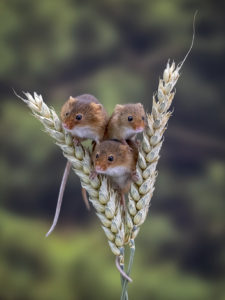 The image left, entitled “Three’s a Crowd”, was entered into the Tramonta 2018 FIAP International Salon, Montenegro where it received a score of 26 and was awarded a Victory P.W. Gold medal! I was quite surprised, as although I thought it was a good image it had not been accepted into the BPE Salon at Shrewsbury a few days earlier! To say I’m quite chuffed would be an understatement as I’ve not won any medals before. This was one of hundreds of Harvest Mice images I took on a recent Macro workshop. I’m still editing the rest!

Well done Michelle and it just goes to show that getting knocked back by one judge shouldn’t stop you – the next judge may think you’re brilliant. I’m sure we’ll see more of the mice in the next few contests.