President’s Night 2017: A Night to Remember!

Rearrange these 4 words into a well known saying ‘to rafters the packed’; yes Wakefield Camera Club was full on Monday night with anticipation riding high. This was of course our 2017 President’s Night and Sally had pulled out all the stops in persuading internationally acclaimed Yorkshire photographer, Andrea Hargreaves to give a presentation.
In her introduction, Andrea explained her photographic roots. These date back to 2008, when she received her first serious camera. Using it for a year on auto, Andrea then enrolled on a 10 week photoshop course. This she says was her epiphany as for her final project she had to produce a montage. The rest as they say is history.
Despite studying art her first attempts at composited images were not noted with success. However following advice, Andrea decided to enter FIAP Salons; these were the catalyst for success and the trophies began to roll in.
Andrea’s work is almost schizophrenic; on one hand she produces superb natural history shots whilst on the other, she creates unique images that evolve around her imagination. Cr 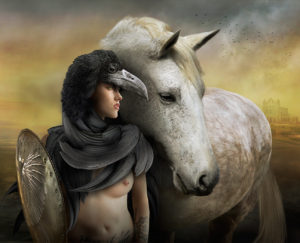 eations that have been composited with an astonishing amount of research, skill and patience.
In the talk that followed, Andrea generously explained how her images are designed. Starting with a model shoot, she selects poses and cuts these out. Backgrounds and sets are put together using shots selected from her own personal archive. The final image will be a composite that involves many, many layers. For instance in her ‘Art of Metamorphism’ series the theme of which is mermaids, a single rock consisted of 8 layers. Even more staggering though was Andrea’s description of how she created the mermaid’s tail using warped legs and palm leaves. Running through all this was her enthusiasm, self belief and self learning. New techniques are thoroughly researched, developed and then put into practice. For example, a model needed hair, so Andrea taught herself how to make a brush which gave her the desired effect. Legs not quite right – chop them off and blend in those from another model! If this sounds crude, it is not in any way meant to be, for the skill and the final results are just awesome.
Following the break where we were able to look at prints made at various stages of a picture’s evolution, Andrea talked about her ‘Ladies’ series, Tiger Lily and Black Raven (shown above). Andrea was able to analyse for us the steps in the evolution of each image and the reasons behind each step.
How do you conclude an evening like this? Well how about 73 layers, 860mb file size and over 40 hours work in producing a piece of Andrea’s digital art… Thank you Andrea for an inspirational and totally absorbing evening.

Thanks Nigel for the report. Looks like I missed a really great evening. Here’s where you can see much more of Andrea’s work here. (Note: at the time of writing Andrea’s website appears to be experiencing difficulties which I am sure will be cleared up soon).